One of the few day schools with training for mosaic artists is the ‘Scuola Mosaico del Friuli’ in Spilimbergo – in the north of Italy. Located about 100 km from Venice.

The training to become Maestraor Maestrotakes 3 years. There are students from all over the world, the lessons are only given in Italian and you must not be older than a certain age to be admitted to the training (I thought 27 years). If you are older, you must come up with very good reasons for being allowed to follow the course. 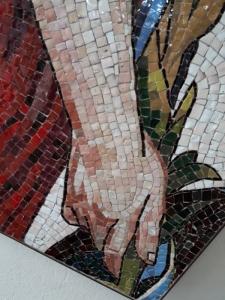 In the first year the students will work with the Roman mosaics and what is called Facchina – this name is derived from the man who invented the mosaic paper in the 18th century. Faccina means that you make the mosaic ‘indirectly’, the stones are glued with a flower paste on a specially designed paper -mosaic paper-. Later, the mosaic will be cemented and what you have created will appear in mirror image. The great advantage of this invention was that the mosaic could first be completed in the workshop and then when everything was ready they went on site to place the mosaic. The disadvantage is that much of the liveliness of the mosaic is lost, also because with this technique the stones are placed very close to each other (see example of the hand). 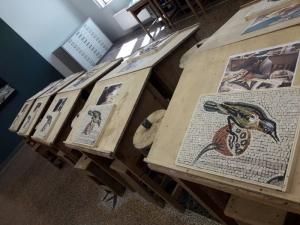 The Roman mosaics are made indirectly. And then have different characteristics. Which are discussed in detail in the workshop ‘Old mosaics’.
In Spilimbergo all students make a mosaic of the same theme, because they are there to learn a craft. 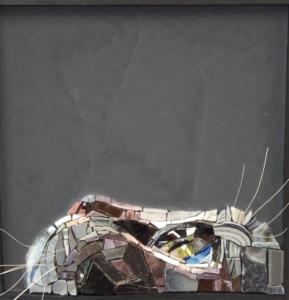 In the second year, the students work on portraits of both animals and humans. If you look closely at the female face on the right, you will see how perfectly transparent the eye appears to be. To do this, many small stones are placed next to each other. Not only are various materials mixed for this technique, but the ‘tesserae’ that are used are very different in size. 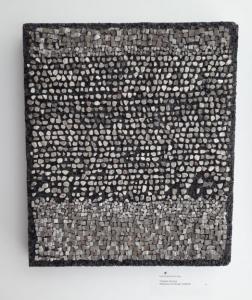 In the third year, ‘Contemporary mosaic’ is made in which the artist is central. They work with a very diverse range of materials. This style of mosaics is actually still very young. Only in the last 10 years has there been a shift in mosaic education. Where less emphasis is placed on mosaic as an art of integration and a pure craft, but mosaic as an art form. Beautiful works that you can hang perfectly against your wall as a work of art in itself.

It is very difficult to show this well on a photo, so if you plan another trip to Italy, make sure to put Spilimbergo on your program and go and have a look for yourself, I would say. 2 floors full of mosaics, everything is made in mosaic there, the entrance hall, the staircase, the floors (often made in terrazzo), the columns outside, and then of course the large number of works that can be admired there. I assure you, you have never seen mosaic like this. People who are not really involved with mosaic and come there for the first time usually say: “I didn’t know that mosaic could be this too”.

In the meantime I can’t count on one hand how often I’ve visited there, but every year I look forward to admiring the new works. The school also publishes a yearbook every year, presenting the latest works.

Want to join the discussion?
Feel free to contribute!